This week we kick off a new 12-part series to look at the core teachings of Jesus. We’re going to explore 12 compelling problems that we all feel deeply, what Jesus teaches about how to solve them, and ways for each of us to respond.

We’ll begin with a core teaching about the mission. Today’s text starts with Jesus looking at crowds of people who have come out to hear his teaching. What did He see when He saw them? And of all the things Jesus could have said, why did He say what comes next?

Join Patrick Morley and let’s identify what’s going on below the surface, why it matters, what’s at stake, what holds men back, and what we can do about it.

Verses referenced in this lesson:
Matthew 9:36-38

The CORE TEACHINGS of JESUS

Hello men, Welcome to Man in the Mirror Bible Study. I’m Pat Morley and, today, we are going to be starting a new series called The Core Teachings of Jesus. First up is going to be An Ache For The Harvest, An Ache For The Harvest. So please, if you would, turn in your Bibles to Matthew Chapter 9 Verse 36. Matthew Chapter 9 Verse 36.

So here’s the situation, Jesus has been moving about speaking to crowds, large crowds. We know that he fed 5,000 plus women and children. He fed, at another time, 4,000 plus women and children, so huge crowds in Galilee. So, Jesus was probably something like a rock star. It would have been extremely unusual for these little small villages to be able to assemble this many people.

So, he’s moved around Galilee, and He’s with His disciples, and He looks at the crowds. And it says in Matthew Chapter 9 Verse 36, “When he saw the crowds, he was sickened by their depravity.”

Interesting. It doesn’t say that, does it? But He probably was sickened by their depravity and sin. He probably was because they were people. He was probably really. But it’s interesting to note that the first disposition of Jesus’ heart is compassion. That word literally means that He’s to be moved in your inward parts. It says that when He saw the crowds, He had compassion on them because they were harassed and helpless like sheep without a shepherd, or like a family without a father, or a business without a leader, or a church without a pastor. They were like sheep without a shepherd.

First thing I want us to talk about this morning in this, a message called An Ache For the Harvest, is a labor shortage. Reading on in Verse 37. So, now, let’s make this our situation too. So, let’s just say that we all are disciples. Let’s say that we all, now, go together up to the busiest intersection in this city, whatever that is. And let’s just say that we line up along the sidewalk and we’re now looking at the crowds, thousands of people, thousands of people. Or, for those on line in a smaller city, tens of people, or hundreds of people, whatever it is.

But thousands of people in their cars going every morning to their place of work. And every afternoon, they’re coming back to go home. And if we could get inside those cars, we would see all kinds of presenting problems. Marriage problems, money problems, work problems, blah, blah, blah. But when you get below the surface of those presenting problems, we would also find the seven inner aches and pains that I talk to you about all the time that men say are the things that are really troubling them.

Yes, there are undulations. And yes, we are in an undulation. Gallup says that church attendance has dropped from an average of 70% throughout most of the 20th century by over 20 points down to 47% today, church. And I can’t remember who it is, but somebody worth quoting said that millennials, “Now 43% of millennials,” a term I don’t particularly care for as you know, “Don’t have any use for God,” compared to 28% of boomers, by the way, who have no use for God. So, I have been looking for, and if anybody knows of a longitudinal study I’d like to know because I’m pretty sure that boomers felt the same way when they were the same age as the millennials are now, but I haven’t been able to find that study yet.

I actually think I’ve seen something like that, but it’s so long ago, I can’t find it on Google yet. The harvest is plentiful. The harvest is plentiful. There are more than enough of these people driving up and down these streets that we’re on the sidewalk watching go back and forth. There are thousands and thousands and millions, and tens of millions of those people who would eagerly embrace the message of the gospel, if there was someone to go tell them. The workers are few. Jesus said, reading on, “Ask the Lord of the harvest to send out workers, therefore, to send out workers into his harvest field.”

WHAT IS HOLDING MEN BACK?

Now, we could probably convene an international symposium and bring people in from all different countries, have several thousands of delegates and have speakers, and talk about this for a week. But basically you got sick model and you got well model people. You got sick model Christians, and you have well model Christians. And the sick model Christians, when I was between the Army and the University of Florida, I didn’t graduate from University of Florida, I only went there one quarter, it wasn’t a place for vets when I went there, trust me. Walking through the Plaza of the Americas it’s power this, peace that, and I’m a vet. And next thing I think you’re going go to do is throw chicken blood on me.

But anyway, but between the Army and the University of Florida, I was a debt collector for a company called GAC Finance. And I had a great mentor. And he taught me this about collecting money from people that owed that hadn’t paid, “There are three kinds of people who haven’t paid: can’t pay, won’t pay and shouldn’t pay. And your job is to figure out which one, and then help them figure out what their next move is.”

So, you’ve got in the sick models, they’re not paying their debt. They donate for the harvest. You got your can’t pays. And I think we have a whole lot of people today who have been educated, but not discipled. They’ve got it up here in the head, they know about God, but they don’t really know Him. They’re not Jesus people. They haven’t got the gospel under their skin, yet. And so, more could be said about that at another time.

Then, you have your won’t pays. So, this is the problem with spiritual obesity. We have an entire generation of Christians, now, who have been gorging on this beautiful teaching. We’ve had some of the best teaching. I mean, it’s incredible what you can get online and stuff where over the last quarter of a century, it’s fantastic. And the big, big churches with the great preaching, and the small churches. It’s been unbelievable. The books it’s been unbelievable what’s happened in the last quarter… Great, great teaching. And a lot of Christians have been gorging on this. And we had become, in some sense many of us, spiritual over eaters, spiritually obese. And here’s the thing, I would say, this is my opinion, but I think most Christians today don’t need more food, they need more exercise.

So, can’t pay, won’t pay. And then shouldn’t pay. There is another category of people that are hurting, that are broken, that are bruised. Maybe they’re the harassed and helpless sheep out there on the street. But maybe they’re one of the disciples too. And, for whatever reason, they don’t at this time have enough Jesus for themselves. They’re the ministry not the minister. They need to be filled up. And you might be this way. You might be broken, you might be hurting. And so, if you don’t have enough Jesus for yourself, then don’t let somebody try to browbeat you into doing something that you really actually should have somebody doing for you. Doing for someone else, what you should actually have somebody else doing for you. You with me? Tracking? More can be said.

But the solution to all of this is for those of us who are well model, who have been discipled it’s for us to ask, if we need to, what has been holding us back? Why do we not have an ache for the gospel? And if we don’t, the Big Idea is to; Ask God to give you an ache for the harvest.

So, I was sitting in a small church… I’ve done that when we travel… Is sitting in the back of a little church with maybe 60 seats, 12 people in the church. Sitting in the back, looking at the 12 backs, the backs of 12 heads. So, 48 empty seats. People who loved God, a pastor who’s preaching the word, a group of people who would love to be flourishing as a church, who longs to have maybe young families in their community coming in and populating those seats.

And I’m sitting there and I’m thinking, this is where I started thinking about this question, “What is holding these people back from taking action? Why don’t they have an ache for the gospel? Why don’t they?” I mean, I know these people well enough to know I think, I haven’t talked to them, I think they love Jesus and they want to do, but it’s not happening. It’s just not happening.

And guess what? That started me thinking, “Honestly, it hasn’t been happening here either for a quarter of a century.” For 25 years, I’ve been talking to us about making sure that we engage the next generations of men in this community. And we are, to some extent. But, honestly, I don’t think we have an ache for the harvest.

Now, it could be that I’m right in the hypothesis, that it’s because we don’t have this ache for the harvest. I could be wrong. So, I won’t say that I’m right.

LET THE GOSPEL GET UNDER YOUR SKIN

HELP US MEET THE Q4 GOAL

How To Nurture YOUR Relationship With The Holy Spirit Aug 9, 2019 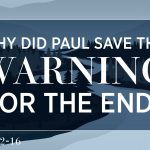 Why Did Paul Save This Warning for the End? 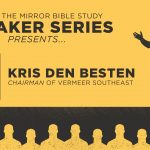