These are troubled times, and the issues facing us cannot be left unaddressed. But these are hardly the worst times our nation has seen. Not even close. In this lesson Patrick Morley will help you gain or regain a sense of perspective. You will be reminded about the heart of God and His divine plan to address the issues we face.

Join us as we explore a key leadership lesson from King Manasseh. If you’re not already in a group, invite some other men to watch the video and discuss it together. We will always be stronger together.

Hello men, and welcome to Man in the Mirror Bible Study. I’m Pat Morley, and today we’re going to be talking about God’s plan for healing a nation. Please turn in your Bibles to Ezekiel chapter 18, verse 32. Men we need to come to our senses. We need to understand what’s going on in our country and perspective. I realize there are men around the world who will be watching this as well, but I really want to focus in on the problems in the United States today. And of course, there are lessons here for everybody from the scriptures.

These are by far the worst times we’ve experienced in the history of our country. Not by a long shot. If you look at the Civil War, when the United States had a population of about 31 million people, 620,000, at least 620,000 Americans died in that war. That’s 2% of the entire population of the United States. And these are not some foreign adversaries that have killed Americans. It’s brothers killing brothers. We killed each other, 2% of the population. If that were to happen today at a population of 330 million people, that would be like 6.6 million Americans killed, their blood shed by each other. By far and away, these are not the worst times we’ve ever had. Despite the social unrest, the political unrest, the health pandemic, and all of the other problems, racial injustice, all these other problems. These are not the worst times we’ve ever been through by a long shot.

Or take for example, World War II. I looked up the statistics out of… First of all, 75 million people worldwide died in World War II. But just in the United States, 16 million Americans served in the armed forces. 405,000 died, 671,000 were wounded, and 130,000 Americans were taken as prisoners of war.

Now watch this. That’s when the population was 132 million people. Only 40% of what it is right now. So if World War II happened today, that would mean that 40 million American men and women would have gone to war. 1 million of them, over a four year period, would have been killed. 600,000 wounded and 325,000 prisoners of war. Men we need to come to our senses. Yes, we have a lot of terrible things going on in our country, but this is by far and away, not the worst that we’ve ever been through. And God has a plan for healing our nation.

THE HEART OF GOD

The first thing to understand is God’s heart. The heart of God. That’s the first thing we’re going to look at. And if you are at Ezekiel chapter 18, verse 32. Read this with me.

And 2 Chronicles, chapter seven, verses 13 and 14, and especially chapter 13 applies so much for what’s going on today. Verse 13 says, “When I shut up the heavens so that there is no rain or command the locusts to devour the land or send a plague among my people.” Just like the one we have going on right now. And he goes on then to say, that text that almost every Christian is familiar with. “If my people who are called by my name will humble themselves and pray and seek my face and turn from their wicked ways, then I will hear from heaven and I will forgive their sin and I will heal their land.” This is the great promise of God. This is the heart of God. And the Big Idea today, coming from this: Humble repentant prayer. Let each man begin each day in humble repentant prayer.

We get one of the most powerful illustrations in scripture about God healing a nation in the story of Manasseh. We’re going to look at a leadership lesson from the life of King Manasseh today.

THE EXAMPLE OF MANASSEH

The example of Manasseh. If you would turn to 2 Chronicles, chapter 33, verse one. “Manasseh was 12 years old when he became King and he reigned in Jerusalem 55 years. He did evil in the eyes of the Lord, following the detestable practices of the nations the Lord had driven out.” And he did things like he worshiped the starry hosts. He sacrificed his own children. He practiced divination and witchcraft and consulted mediums and spiritists. And then at the end of verse six, “He did much evil in the eyes of the Lord, arousing his anger.”

Then in verse nine, “Manasseh led Judah and the people of Jerusalem astray so that they did more evil than the nations the Lord had destroyed before the Israelites.” So this King Manasseh led his nation into all kinds of evil things that arouse the anger of God. And then in verse 10. “The Lord spoke to Manasseh and his people, but they paid no attention.” Then God disciplined Manasseh and the nation. In verse 11. “So the Lord brought against them, the army commanders of the King of Assyria who took Manasseh prisoner, put a hook in his nose, bound him with bronze shackles and took him to Babylon.” So this was a nation who had gone from the greatness of David and Solomon now to one of the worst Kings in the history of the country who’d… And the people had done all kinds of evil.

But remember the heart of God? God takes no pleasure in the death of the wicked. God takes no pleasure in the death of anyone, but rather that all would come to repentance and live. And he gave a formula for doing that in 2 Chronicles, chapter seven. And now in chapter 33 of that same book, Manasseh, who would be very familiar with God’s promise in the answer to Manasseh. In verse 12, “In his distress, he sought the favor of the Lord his God humbled himself greatly before the God of his ancestors. And when he prayed to him, the Lord was moved by his entreaty and listened to his plea. So he brought him back to Jerusalem and to his kingdom. And then Manasseh knew that the Lord is God.” And then he restored the country and told the people of Judah to serve the Lord, the God of Israel.

So this was a beautiful story of what can happen in a nation. How the healing of a nation can take place. It’s when the leadership of the nation and the people of the nation also obey the prescription of God or follow the prescription of God here, which is the Big Idea. Humble, repentant prayer. Let each man begin each day in humble, repentant prayer. Let you and I begin each day in humble repentant prayer, and let’s exhort and encourage others around us to be more humble. To be more independent. To approach the problems that we have in prayer.

And then the final thing for us to look at this morning is just our response to all this. The first thing is humility. It’s to be humble. Benjamin Franklin when the constitutional convention or whatever it was called was reading are the United States Constitution 1787. There was a lot of division about what should be at it. Ben Franklin, who was 81 years old, wrote a speech. He was so frail and so ill that he couldn’t even read his own speech. He had to have somebody else do it. And he commented that as he had grown older, his judgment had become less sure. And there were many things in the constitution that he didn’t think were right, but he was convinced that he was not infallible. And he encouraged his fellow convention attendees to consider their own infallibility.

If Franklin hadn’t given that speech, we probably wouldn’t have a constitution today. Basically, he called on all the members to humble themselves. To humble themselves. That’s the first part, humble. Second, repentant. In the movie, Godfather III, Michael Corleone is meeting with Cardinal Lamberto. And Cardinal Lamberto says, “Would you like to confess your sins?” And Michael Corleone played by Al Pacino said, “I haven’t done that in 30 years. So what’s the use?” The Cardinal leaned in on him and finally Corleone said, “What’s the use of confessing my sins if I don’t repent?” Repentance means to make a change.

Let me give you an example. Right now the rancorous speech that is so prevalent, the willingness of people to say whatever comes to mind without giving it much thought to say, mean spirited things and to dig people. All of these things have to do with speech. So one thing that I’m doing, and I would encourage each of you to do too, as a way of acting out on repentance is to adjust our speech. My word for the year is speech. It’s based on Proverbs 22, verse 11. “He who loves a pure heart and whose speech is gracious will have the King for his friend.” If you’re in sales, you know that you can’t sell people something by insulting them at the same time. You have to be gracious in your speech and you have to work things through and solve problems.

So the second part is to repent. Humble repentant, and then prayer. So Manasseh, there is a book in the Apocrypha. The books that didn’t make it into the Protestant Bible. It’s called The Prayer of Manasseh. And in it he says, “For I have sinned above the number of the sands of the sea.” He prayed, “Now, therefore I bow the knee of mine heart, beseeching thee of grace.”

Our dearest father, we bow our heads before you. We assume the posture of humility before your goodness and your greatness. Lord, we confess our sins. We confess that we have, some of us, allowed our religion and our politics to become married. And Lord, we know that we need to now change. We need to repent. We need to get a divorce. We need to allow the gospel to inform our thinking. The gospel to inform our speech. Lord help us to be men with pure hearts. Help us to be those who love a pure heart and whose speech is gracious so that we might be able to influence leaders around us.

Men I want to thank you first of all for being part of this Bible Study. I think that we have a tremendous opportunity as leaders to have an impact on this nation. And the way to have that impact is by making disciples who make disciples. Making disciples is God’s designated way to release the power of his gospel on every problem that we face. It doesn’t make any difference how the nation got into the problem that we are in. The only solution is to disciple our way out. Will you join me? Let’s join together in humble repentant prayer. Let each of us begin each day in humble repentant prayer. Thank you.

HELP US MEET THE Q3 GOAL

How You Can Conquer Coronavirus Worry Apr 16, 2020 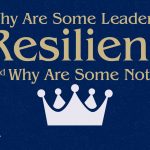 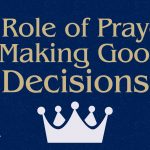 The Role of Prayer in Making Good Decisions