No Matter What Happens, You Can Always Rejoice

No Matter What Happens, You Can Always Rejoice

Everyone admires a man who can handle tough times as well as he enjoys the good times. Maybe you are that man, or maybe you would like to be. In this message, Pat will show you Paul’s prescription to handle whatever life throws at you. The promise is that no matter what happens, you can rejoice. This is “next level” discipleship!

Verses referenced in this lesson:
Romans 5:1-11

No Matter What Happens
You Can Always Rejoice

On November 21, 2010, a grenade landed on a rooftop in Helmand Province Afghanistan. Lance Corporal Kyle Carpenter saw the grenade immediately and without hesitation hurled himself on top of it thus saving the life of his fellow Marine, Nick. On the way to the medical hospital, three times Corporal Carpenter’s heart stopped. He died three times. When the other Marines came and found them up on the rooftop, his body was still smoking. As it turned out, Corporal Carpenter did not die, but he lost his right eye, his carotid artery was damaged. He had to have shrapnel removed from his brain. His right arm was shattered and had 30 fractures. He had shrapnel in his legs. His jaw, part of it was missing. Knocking out most of his lower teeth. It was a long arduous process of recovery. He was in and out of the hospital over the next three years. 40 different operations. And then in 2014 he was awarded by President Obama the nation’s highest honor for valor and bravery, the Congressional Medal of Honor.

Kyle Carpenter has inspired millions of people because of the attitude that he displayed both during his recovery and then also even up and through today. He is a national treasure and a national hero.

Today we’re going to look at the attitude that Kyle Carpenter has and displays because of his Christian faith. He’s a believer. He said that even in the deepest and the darkest times, he said, “I never lost my faith.”

Let’s take a look at the text today and find out where does this kind of attitude come from.

WHEN TIMES ARE GOOD, REJOICE

If you look, there’s so many theological concepts in this. It’s quite amazing. So the thing that I want us to do however is just look at the situation that Paul was writing to. Paul was writing to a situation where there were people who were going through good times but also people who were going through difficult times and struggling. As I said, first thing we want to do is talk about when times are good. Well, what do we do when times are good? Paul has three ways for us to respond to this peace that we have through our Lord Jesus Christ. I’ll just preview them for you.

The first one then, “We rejoice in the hope of the glory of God.” Just a little big picture here. Many of you know I’ve been working through an autoimmune disease. I’m much, much better now, but there as about a year and a half where it was incredibly difficult. It was taking me four hours to get going in the morning. I couldn’t squeeze a bottle of honey. I couldn’t lift a cup of coffee. It was horrible. And I was reading one day Psalm 118 verse 24, which says, “This is the day the Lord has made, let us rejoice and be glad in it.” And I thought to myself, “Wow. That reminds me of some kind of slappy happy thing that might’ve been said in the 1950s with one of those sing-songs.” (Sings). And I’m thinking, “Hey, this is not that day. I don’t really feel like rejoicing.” And I thought to myself, “Well, is this scripture really true?”

So let me ask you are you in a good place right now, and if you are in a good place, are you rejoicing? For example, Jesus healed 10 lepers. He told them to go off and show themselves to the priest. But the Bible says that only one of them came back to say thank you to Jesus. Do you have a spirit of rejoicing, one that leads to gratitude, good application? There should be no negative Christians in the world technically speaking. We should be rejoicing.

I’m going to go ahead and give you a memory verse now. It’s First Thessalonians chapter five, verse 16. Every one of you an memorize this verse. What does the verse say? It says, “Rejoice always.” “Rejoice always.” I will be a man who always rejoices; sometimes a feeling but always my attitude.

WHEN TIMES ARE TOUGH, REJOICE

Verse four, “Perseverance, character. And character, hope. And hope does not disappoint us because God has poured out his love into our hearts by the Holy Spirit whom he has given us.” It says, “Hope does not disappoint. Seek God in suffering, and you will not be disappointed.” I learned a long time ago that my sufferings compel me to seek the God that success makes me think I don’t need.

So we rejoice when times are good, and we rejoice when times are tough. Let’s go on and read a little excursives here from verses six on where Paul explains, “You see at just the right time when we were still powerless, Christ died for the ungodly. Very rarely will anyone die for a righteous man, though for a good man, someone might possibly there die,” like Lance Corporal Kyle Carpenter. “But God demonstrates his own love for this. While we were still sinners, Christ died for us. Since we have now been justified by his blood. How much more shall we be saved from God’s wrath through him?”

Causes for rejoicing. Verse 10:4, “If when we were God’s enemies, we were reconciled to him through the death of his son, how much more having been reconciled shall we be saved through his life?”

The text today tells us that we can rejoice in the hope of the glory of God when times are good. We can rejoice when times are tough in our suffers. The Big Idea today, I will be a man who always rejoices; sometimes a feeling but always my attitude.

BECAUSE OF JESUS, REJOICE

The third thing I want us to take a look at then today is, Because of Jesus, rejoice. We see it here in verse 10, “For if we when we were God’s enemies, we were reconciled to him through the death of his son. How much more having been reconciled shall we be saved through his life?” And then watch this, “Not only is this so but we also rejoice in God through our Lord Jesus Christ through whom we have now received reconciliation.”

So Paul explained how we are justified by faith. Another way of saying this is that it’s reconciliation with God. We are reconciled with God because Christ Jesus even while we were still sinners, he died for us. So we can rejoice because of Jesus. We can rejoice when times are good because of the hope of the glory of God. We can rejoice when times are tough because of our sufferings because suffering produces perseverance, perseverance, character, character, hope, and hope does not disappoint because God has poured out his love into our hearts by his Holy Spirit. And then thirdly, because of our reconciliation through Jesus Christ our Lord.

My five favorite verses about Jesus. I’ll give you the addresses here in a moment but let me just give you the verses. We can rejoice because of Jesus. He is the image of the invisible God. All the fullness of the deity dwells in him in bodily form. He is the exact representation of God’s being. Jesus himself said, “He who has seen me has seen the father. The father and I are one.” Colossians 1:15. Colossians two, verse eight. Hebrews chapter one, verse three. John chapter 14, verse nine. And John chapter 10, verse 30.

Jesus Christ is the most interesting person whose ever lived, and when we bring ourselves into alignment with him and to relationship with him, when we are reconciled with him and our justified by faith through his death and sacrifice for us, we are actually able to be in communion with God himself. Jesus Christ is God, and that is cause, my brothers, for rejoicing. I will be a man who always rejoices; sometimes a feeling but always my attitude.

Our father in Heaven, we thank you for this first lesson in how to live life your way. Thank you that Paul has laid this foundation of rejoicing that we should rejoice always, and we can rejoice always because it’s not merely a feeling. It’s also an attitude. I pray that as we are reaching up now to the next level of discipleship, that you would help each man who hears this message grasp and fully understand and truly believe and make this concept of rejoicing always foundational to his very being. And I pray also that you would help every man who hears this message disciple other men to the next level by helping them understand that this is the mindset, this is the underlying attitude, this is the foundation that Paul is beginning to teach us on how we can live life your way.

So God, I want to be a man who is always rejoicing; sometimes a feeling but always my attitude. And I pray that you would help me and all of us to this end through our Lord and savior Jesus Christ, and who’s name we now pray. Amen.

HELP US MEET THE Q4 GOAL 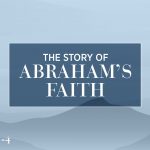 The Story of Abraham’s Faith 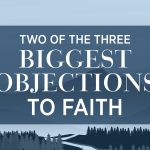 Two of the Three Biggest Objections to Faith