Welcome to a brand new series on the book of Romans!

Don’t you just love rubbing shoulders with an excited, passionate man who really knows what he’s doing? The apostle Paul is such a man. Paul is the ultimate example of a man who took making disciples seriously. If you too are serious about making disciples, then what could be better than to figure out and imitate what Paul thought, said, and did?

Join Patrick Morley as we kick off a verse-by-verse study of Romans—Paul’s magnum opus on the life of a believer. In our first lesson you’ll learn how Paul described his mindset, his mission, and his message. His language will spark a forest fire in your heart, his passion will infect you like a highly contagious virus, and his challenge can forever change your life.

Verses referenced in this lesson:
Romans 1:1-17

ROMANS 1-4: What Makes a Man a Believer

Hello men, and welcome to Man in the Mirror Bible study. I’m Pat Morley. Today, we’re going to be starting a new series in Romans, the book of Romans. Today we’ll be talking about Paul, the ultimate disciple maker.

But what are these things that Paul did say in the presence of many witnesses? We’re going to be starting to look at some of those here in the series today even. Paul in perhaps one of his most famous verses says, “I am not ashamed of the gospel, because it is the power of God for the salvation of everyone who believes.” We’ll be taking a look at that verse today.

Wouldn’t you love to have the passion of Paul? What is it that drives Paul, that animates Paul, that makes Paul who he is, and then how can we make that part of our lives and what we imitate in our own disciple-making? I could have picked the audience here of the men who need to hear this message, but I’m going to be speaking to you today as the men who are going to be speaking to the people who need to hear what Paul has to say, the disciple makers.

THE MINDSET OF A DISCIPLE MAKER

Number one, he viewed himself as a servant. He had the mindset of the servant. The word servant here in the Greek is doulas, D-O-U-L-A-S. It means bond slave. It’s someone who yields all the rights they have to their own life to a master. This is how Paul viewed himself, as a servant of God.

You might have heard me say in the past that a servant is not asking, what do I want? A servant asks a different question. A servant asks, what does the master need? The chief test of a servant is whether or not you’re willing to be treated like one.

I remember having a couple of men at our visitor table at the Bible study one Friday morning, and one of the man kept saying to the other guy, “I recognize you. It seems like I’ve seen you around before.” Finally, the man said, “Yes, you have seen me around before. I am a disciple of Jesus disguised as the janitor in the office building where you work.” He sensed that his calling was to be a janitor who lived his life for Jesus Christ.

Then set apart for the gospel of God. Paul we know on the road to Damascus had this blinding light experience in which God, Jesus Christ set him apart for a ministry to the Gentiles.

In verse 7, we read that Paul is greeting these Roman Gentiles. He says, “To all in Rome who are loved by God and called to be his holy people, grace and peace to you from God our Father and from the Lord Jesus Christ.”

Well, how did they become Christians in the first place? We don’t know, but it’s very probable that at Pentecost, when the Holy Spirit came on the people from many nations, it says there were visitors from Rome. Very likely or very possibly they took Christianity back to Rome.

Meanwhile, Paul, called to be an apostle to the Gentiles, had been traveling around. He’s on his third missionary journey. He’s wrapping that up. He’s in Corinth for a few months. He knows about what’s going on in Rome. He’s never been to Rome. He’s always wanted to go to Rome. He’s planning to go to Spain and to go to Spain through Rome, but first he has to go through Jerusalem. So he writes this letter to the Romans to help them think through all things Christian, everything about what it means to be a disciple, to become a disciple, to live as a disciple, to make disciples. Romans is his magnum opus, the greatest work. All theologians will appeal to Romans as is one of the great theological works of all time.

Paul then, against this backdrop, writes this letter in 57 plus or minus a year to the Romans, and he says that he is set apart for the gospel of God, and then he starts to talk about this gospel. “The gospel he promised beforehand through his prophets in the holy scriptures regarding his son, who as to his earthly life was the descendant of David and who through the Spirit of holiness was appointed the Son of God in power by his resurrection from the dead Jesus Christ our Lord. Through him we received grace and apostleship to call all the Gentiles to the obedience that comes from faith for his name’s sake.” That’s the Damascus road experience. He says, “And you also are among the Gentiles who are called to belong to Christ,” and then the greeting to all in Rome.

THE MISSION OF A DISCIPLE MAKER

The next thing I want us to look at is the mission of a disciple maker. Let’s read on in verse 8. “First, I thank my God through Jesus Christ for all of you, because your faith is being reported all over the world. God, whom I serve in my spirit in preaching the gospel of his Son, is my witness how I constantly remember you in my prayers at all times.”

Verse 11, when we think about what’s motivating Paul to write this letter to the Romans, it might be right here in verse 11. He says, “I long to see you,” or, “I yearn to see you.” The motivation in Paul is the love of Jesus Christ that compels him to want to preach the gospel, to make disciples of all men.

Verse 12, “That is that you and I may be mutually encouraged by each other’s faith.” So Paul viewed the mission as a give and take. It wasn’t always a one way thing.

Then he goes on in verse 13, “I do not want you to be unaware, brothers and sisters, that I planned many times to come to you, but have been prevented from doing so until now, in order that I might have a harvest among you, just as I have had among the other Gentiles.” Part of the mission of a disciple maker is to have a harvest. When a Hunter goes hunting, he really isn’t satisfied unless he sees some game fall. The idea here is to, in the mission of disciple maker, is to create a harvest for Jesus Christ.

Verse 14, “I am obligated both to Greeks and non-Greeks, both to the wise and to the foolish.” Another part of the mission here is a sense of feeling under obligation. It’s part of what it means to be called and set apart. You’re under an obligation to make disciples. He was specifically called to the Gentiles, and he says, “Greeks and non-Greeks, both wise and foolish.” The Greeks are the Hellenists and the non-Greeks are, it’s actually the word from which we get barbarian. Both the cultured and the crude, and whether they are wise or foolish. He’s under an obligation. The mission of a disciple maker is he has an obligation to people of all types, whether they are wise or foolish.

Verse 15, “That is why I am so eager to preach the gospel to you who are in Rome.” What are those reasons? He’s prayed for them. He’s longed to see them. He wants to impart some spiritual gift to them. He wants to have a harvest among them, and he is under an obligation to go to them and preach this gospel, which is his gift. This is the mission of the disciple maker, to by all means possible to reach as many as we can.

THE MESSAGE OF A DICIPLE MAKER

This is the gospel message, that there is a righteousness of God that has been revealed and that is taken possession of by faith. The righteous will live by faith. This is probably the theme verse for the whole book. In the process of Paul discipling the Romans, it all revolves around this idea of this righteousness that comes to us by faith, and how the righteous will live by faith, and that there’s salvation for everyone who believes in this gospel by faith.

One day, in what’s described as his tower experience based on this verse, Romans chapter 1:17, his heart was changed. He understood that it was a passive righteousness, not an active righteousness of God. It was that righteousness of God that comes by our act of faith. He says this. “Here I felt that I was altogether born again and had entered paradise itself through open gates. Thus that place in Paul was for me truly the gate to paradise.” The message of a disciple maker is the message that opens the gates of paradise for the people that we are called to reach.

Ryan Price is a 26 year old country music singer. He has been playing and singing country music for 10 years. He wrote me. He said that, “I always knew that God was calling me to perform Christian music, but I rejected that. I didn’t want that. that’s not what I wanted. I wanted to pursue fame and fortune. I wanted to pursue self gratification, and so I denied that calling for 10 years.”

Then he wrote me and he said, “A few weeks, ago I was overcome. I was overwhelmed by a sense that God wanted me to perform Christian music. That weekend, I was supposed to meet with my lead guitarist and we were going to write some new country songs. I called him up on the phone and I told him, ‘You know, I just can’t do this anymore,’ and then I told him that God had been speaking to me and calling me to write Christian music.” His lead guitar said, “That’s great.” He said, “Count me in. I’m 100% behind you.” So he came over that weekend and they began to write some Christian songs.

You may already be a disciple maker. You may not have even thought about being a disciple maker, or maybe you’ve known that you were supposed to be and you’ve been putting it off like Ryan Price. Now’s the time. You can be as passionate as Paul. The Big Idea; Figure what Paul would do, and then do that.

Our dearest Father, thank you for the book of Romans, this timeless treasure of theology, and doctrine, and practice that can help every disciple live out to the tips of his fingers for you, but also the things that you entrusted to faithful men, the kind of men that we want to be, who will then be qualified to also make disciples ourselves. We pray that you would tutor these messages and these principles to our hearts for your glory, Jesus. Amen. Thank you, men. 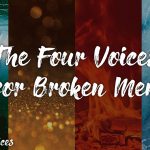 The Four Voices for Broken Men 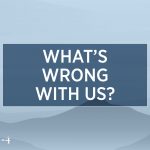 What’s Wrong With Us?